The Rules
1. Eat only real food.
2. The only processing allowed is what I do at home with my raw materials.
3. Don't focus in on carbs or fat, but on real food. Neither carbs nor fat are the enemy.
4. Pay attention to calories.
5. Exercise.

Then let's see what happens.

Practical limitations
1. I live in Fargo, ND, with nary a Whole Foods nor Trader Joe's in sight. Thus, what I eat will be purchased at the local supermarkets. This means that things like pastured butter, free-range eggs, and grass-fed beef are somewhat harder to come by, and expensive. Eating pasteurized milk, supermarket eggs and grain fed beef is not "sinful" and will not be treated as such.

2. I travel a lot for my job and when I travel, I have less control over what I eat. I have discovered that while traveling, I can make low carb, whole food choices easier than other choices, so I may have to relax the rules a bit while on the road. I must make some concessions when I eat out on the road.

This is not a low carb, Paleo, Primal, or low food reward diet. It is a real foods diet.

I recently threatened to rejoin Weight Watchers again, but this time on my own terms. I would follow Paleo principles as closely as possible and take advantage of the weekly weigh in for accountability, as well as the psychological training you get at the group meetings. I would use the PointsPlus as a surrogate for calorie counting, as that is clearly important for losing weight.

So I actually did it. I rejoined. Then I quit a couple of days later. Why? My new dietary philosophy is, simply, incommensurable with Weight Watchers. The new PointsPlus system penalizes foods that are high in carbs and fat and rewards you for eating foods high in protein and high in fiber. Which means Weight Wathcers would penalize most of the foods I would eat, as they tend to be high fat and low fiber.* See Weight Watchers' CEO David Kirchoff's explanation for the new points system.

So they are still fat phobic and have deep faith in the health benefits of fiber, which is disappointing. They recognize that refined carbs are perhaps not so healthy and that is a good thing.  But then they offer tools like a bar code scanner for your smart phone that will tell you how many points there are per serving in packaged foods. Real food does not usually come with a bar code. And the thought of eating skinless chicken breasts and canned tuna fish (high protein and low fat) in order to get the most out of my points was not appealing. They still list canola and other seed oils as "healthy" and promote non-fat products such as fat-free yogurt.

But what really sealed the decision to quit was that the first item I looked up in their data base, coconut oil, was not even listed. That's when I remembered the word "incommensurable" from my philosophy of science studies. We are talking about competing world views and it just isn't possible to mesh them together. It's a bit like trying to get an evangelical Christian to mesh her/his beliefs with Mormonism. It just ain't gonna happen.

*I have nothing against fiber, but believe it should come from whole fruits and vegetables, not ground psyllium husks added to packaged foods. I also do not think it prevents heart disease and cancer.
Posted by Wright Mind at 12:05 PM No comments: 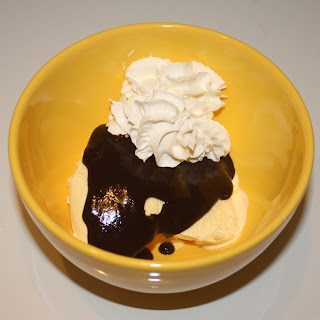 It is possible to construct a great tasting, low carb hot fudge sundae using the following recipe. I cobbled together the recipe below using my experience eating in France as a guide.

Mix all ingredients together and pour into an ice cream maker (such as this Cuisinart). In 25 minutes, you have vanilla ice cream.

Total grams of carbs in the entire batch: 2 (in the egg yolks and vanilla extract). Assuming you get eight small servings of ice cream, that is about 1/4 of a carb per serving.

Break chocolate bar into pieces over a double boiler, and add the butter. When the butter and chocolate are melted, add in the heavy whipping cream. Remove double boiler from heat source, but leave over the boiler until ready to serve. It will be hot going on to the ice cream but will harden to a shell if left on the ice cream for too long.

Makes three servings. Total carbs in the batch: 33, or 11 per serving.

Whipped Cream
Whip up a quarter cup of heavy whipping cream and sweeten with your favorite artificial sweetener.

Making the Hot Fudge Sundae
Make the hot fudge sundae by scooping out 1/2 cup of ice cream, 1/3 of the hot fudge topping, and half of the whipping cream.

Total carbs per decadent serving: about 12.

This is an example of a high fat, low carb (and low protein) dessert. According the the received wisdom, that carbs alone are fattening, that eating fat helps us lose weight, and that calories don't count, this should be an ideal food for weight loss.

But look at the calorie count in the dessert listed above: 250 calories per half cup serving of the ice cream, 325 calories for the hot fudge topping, and 100 calories for the whipping cream. A total of 675 calories for a relatively small dessert. Assuming that you only eat the portions described above.

But hey, even if you ate the entire batch, it would only have 35 total grams of carbs, so it shouldn't be fattening, should it? I could eat the whole batch and still stay in ketosis. Just ignore the 3,017 total calories. Move along, nothing to see. Prominent low carbers are actually promoting dessert recipes laden with fat similar to my hot fudge sundae recipe above, so this is not an extreme example. (The "prominent low carber" recipe linked to above contains a whopping 4,400 calories and fits into a 9x13 pan, so I am assuming there are 12 bars per recipe, or 365 calories per square. Sincere question: how many people would eat just one square?).

And I won't even begin to discuss all of the food reward issues in the hot fudge sundae recipe.

Which is why I am no longer following a low carb diet. I eat a sane diet (the Perfect Health Diet) comprised of real, nourishing foods. It's calories that matter for weight loss, in combination with real, whole foods and exercise.

I had an interesting experience on my last trip to Europe. I flew in to Brussels and hopped on the airport bus to Antwerp, Belgium. I had my camera case and computer bag with me, and a suitcase in the bus cargo hold. When the bus arrived in Antwerp, in front of the train station, I set my computer bag and camera bag down for no more than five seconds, so I could retrieve my suitcase.

In the seconds it took me to get my suitcase, two thieves each grabbed one of my bags and headed in opposite directions. Since my computer was the most valuable to me, I took off running after that thief, with my 50 pound suitcase in my hand. I was hollering "Thief!" at the top of my lungs in an effort to shed a bit of sunshine on his activity and I succeeded in chasing him down. As I got about five feet away, he abandoned my computer bag and took off. I grabbed the computer case and started chasing the camera thief, but alas and alack, he got away with my DSLR, lenses, flash, and video camera. What a lousy way to start a trip to Europe.

However, had I not lost 70 pounds by following a Paleo lifestyle, and had I not been physically active, I seriously doubt I could have chased down this thief while carrying a 50 pound suitcase. I am 50 years old, burdened with a suitcase, and the thief was probably no more than 20, yet I successfully chased him down. It made me feel very grateful for the lessons I have learned about general health and fitness and for the weight I have lost.

This underscores the wisdom of being physically fit. So not everything on this new blog will be about food. Here is the explanation about why I abandoned my old blog, Low Carb Wisdom.
Posted by Wright Mind at 1:10 PM 4 comments:

This tweet by @ultragrssfed (Bobby Gill) says it all.
Posted by Wright Mind at 9:24 PM No comments: